I don't feel well today. I'm laying low and trying to relax. The pellet stove is now working- after clearing the auger with my fingers and almost getting my arm stuck-but it is churning away, filling the room with that lovely warmth that a fire provides.

I turned on the television, surfed the channels, and found "House Hunters International." I haven't watched that in a while, but in a lucky turn, the story was about an American looking for a place in Prague, Czech Republic. It's been three years since I was lucky enough to spend a month there.

It's cold outside, I'm tired and don't feel well, my feet are up facing a warm fire, and I'm headed back in time to that incredible adventure. I never got to show my mother the pictures; as she was the one who made the trip happen, it's one of my biggest regrets.

My mother and aunt drove me to the airport; we tried one of my aunt's interesting, smaller-road routes. I was nervous. Did I pack enough? Did I pack the right things? I checked my brand-new passport for the twentieth time. I was almost forty and this was my first passport, my first time out of the country(besides Canada, Mexico, and Puerto Rico, but really, do they count for an International Relations student?), and my first trip entirely solo. I had flown alone many times, but there was always a friendly, familiar face waiting for me upon landing.

Our airport-bound route meandered past Walden Pond. Through the car window I took in the signs, the parked cars, and tried to imagine the wooded beauty that inspired Thoreau. It wasn't what I expected; the passage of time and urban development altered the landscape. My destination was a city that had withstood the ravages of war and the Iron Curtain; I hoped it was better preserved than the small preserve holding the memory of a naturalist's inspiration.

We arrived at the airport, and in a quick, awkward blur, I checked my bags, gathered my passport and organized my carry on. Again. I hugged my mom, my aunt slipped me some extra cash with the admonition to spend it on myself, and off through security I sped.

After a long, crowded, sleepless flight, I switched planes in London, then boarded the Czech Air jet that would take me to the place I had dreamed of for so long. Exhausted, I dozed in my seat until the cabin staff delivered beverages and a snack. I eyed my open-face meat sandwich, nestled beside my coffee, then glanced at my neighbor, who was thoroughly enjoying his beer. It was 10:30 in the morning, though it felt like 10:30 at night to me. Still, beer with breakfast? Welcome to the Czech Repubic. 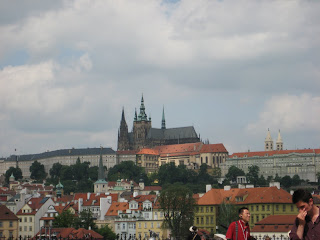 View my complete profile
All written content of this site, unless otherwise noted, is mine and cannot be reprinted or used without my permission. For permission to reprint or use content, please e-mail me at ponygirlnmh@yahoo.com
Thank you.